Frater Jeff- A Rock and Roll Journey To God

Picture yourself in the mid-90s, working for Madonna’s record label, Maverick Records. Someone asks where you see yourself in 20 years, what would your answer be? For Jeff Himes, he would tell you he’d have answered his call from God and on his way to becoming a Catholic priest.

Jeff Himes grew up in Chester County, in the Downingtown and West Chester area. He graduated from Downingtown High School, and after high school spent the next phase of his life working in the music industry. Upon his high school graduation, Jeff played in a heavy metal band (in the ilk of Def Leppard) called Rebel Heart and played in the tri-state area, noting their favorite place to play was a club in Atco, NJ called “Bonnie’s Roxx.” As it goes, the band broke up, and Jeff embarked on a new chapter in Los Angeles, CA.

Once he got to LA, he entered a music school, the Musicians Institute in Hollywood, and was enrolled for about a year. Quickly he learned it was quite expensive to live in LA, and began to work at Tower Records, the flagship store on Sunset Boulevard. Tower Records was often frequented by a celebrity clientele, like Elton John.Working at Tower Records meant Jeff amassed a huge cd collection of almost 5,000 cds. From his job at Tower, he then moved to Maverick Records, whose biggest artist signed at the time was Alanis Morrisette. After his stint with Maverick, he worked in distribution for Warner Music Group, and helped market bands such as the Red Hot Chili Peppers and Muse.

Looking to return back home, he found a position with a Ruff Nation Records, based in Bryn Mawr. This hip-hop label worked with Lauryn Hill and The Fugees as Ruff House Records. He then moved to Greenwich Village in Manhattan and worked with another record label distributor for five years when he began to feel something was missing in his life. He felt a nudge for something else.

This nudge manifested itself into a search for a God or a higher, transcendent existence. He began to wonder about the meaning of life and his place in the world. He wanted to give more and receive less. He began his search in the early 2000s.

Jeff Himes was not born into a religious family, so he started his search from scratch, exploring different religious paths, like Buddhism and Judaism, visiting temples and the Kabbalah Centre. He’d spend his time reading religious texts. While reading the Gospel of John, he felt a very powerful attraction. The bell went off in his head, soul and spirit.

“This must be it,” he decided. This was the moment of truth, and he never looked back.

Upon his calling for Christianity, he was in the need of finding a church to call his home. He was also looking for a new profession. He moved back to Chester County and started attending a Presbyterian church, but wasn’t resonating with it. He was in a deep search for the closeness for the apostolic life. At home, he began to watch the Eternal World Television Network, particularly the program “Journey Home” which featured various converts coming into the Catholic church, which compelled him to learn more about the church. He liked the appeal of the Catholic church, and found that all senses were engaged in the Catholic faith. He began attending St. Elizabeth’s in Upper Uwchlan, PA, completed the RCIA program over a year and a half and received the sacraments on Holy Saturday in 2010. His teachers in the RCIA program noticed a burning fire within him, and mentioned he might be suitable for the priesthood.

After receiving the sacraments, he began working for a United Way non-profit agency that helped people with Parkinson’s, strokes and dementia. At this time, his soul was quiet, but he found a mentor in a coworker. She helped reinvigorate his intense feelings towards Catholicism once again. He felt the spirit calling again, with a stronger desire to serve the Lord. It was this co-worker that directed him to Daylesford Abbey.

He became an affiliate at Daylesford Abbey in January 2012, and enrolled in Immaculata University, graduating in 2018. Prior to his co-workers mention of Daylesford Abbey, he was not familiar with any religious orders within the Catholic faith. He felt a strong attraction to Daylesford, not only due to its locality that would allow him to once again grow roots in Chester county, but was drawn to the Abbey’s welcoming nature. The Norbertines were hospitable, and took the time to know him personally, affirming who he was. He felt a wonderful spirit from the Norbertines and the congregation.

The Norbertine charism of reconciliation allows for healing and unites Frater Jeff closer to God. He is attracted to the experience of healing Jesus has to offer. He finds this is so important in the world today to help unify the world, come together to heal and be less divisive and ultimately be closer with God. He sees the Norbertines as “leaven for the church,” meaning they act as an agent to help others heal and grow in the Kingdom of God.

At this time, Frater Jeff is a seminarian graduate student of Theology at St. Charles Borromeo. His title “Frater” is different from the title “Brother” in that it indicates he is on the path to ordination. He took his Solemn Vows on August 28, 2019, this is the final step before ordination.

For those interested in vocations, Frater Jeff says this: 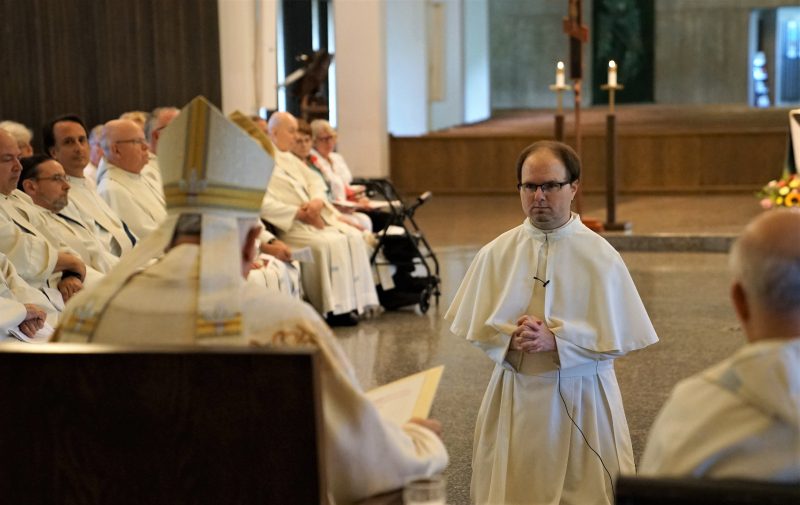