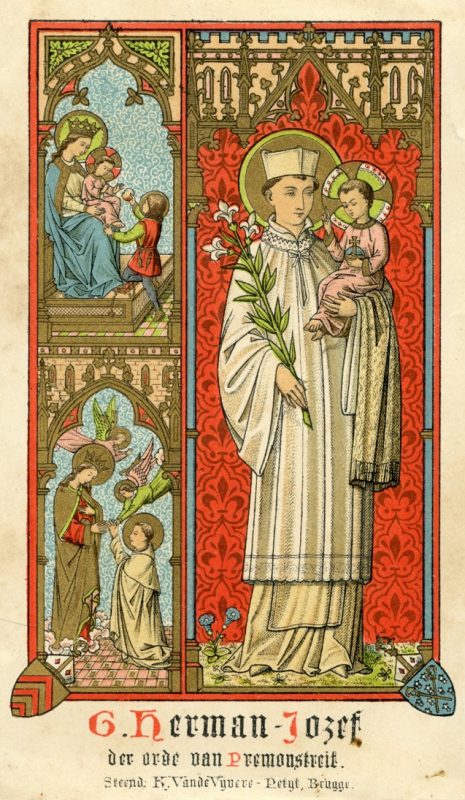 Devotion to Mary and Sacred Heart.

Ca. 1150 to 1241. Born in Cologne, young Herman displayed gifts of mystical prayer from an early age. Saint Herman Joseph’s call from God was clear and present early on. He joined the abbey of Steinfeld where he gained renown for his preaching. His devotion to Mary gained him the addition of the name of Joseph to his first name. He wrote devotional poetry to Mary and was among the first to write similar literature concerning the Sacred Heart.

In every age, O God, you move our hearts to deep affection.
Through Jesus’ words on the Cross
we have been given Mary his mother as mother of us all.
On the same Cross his opened heart became for all
a place of refuge and consolation.
From his tender boyhood years to his wise old age
Herman Joseph came to know the Blessed Virgin
as his mystical mother, sister and spouse.
In his years of contemplation and service
he came to knowledge of your Son’s heart
that overflowed into hymns of ecstatic prayer.
Open our minds and hearts to such devotion
that we too may be moved with love that moves the stars.
We ask this in the name of Jesus Christ
in the communio of the Holy Spirit this day and forever and ever. Amen.