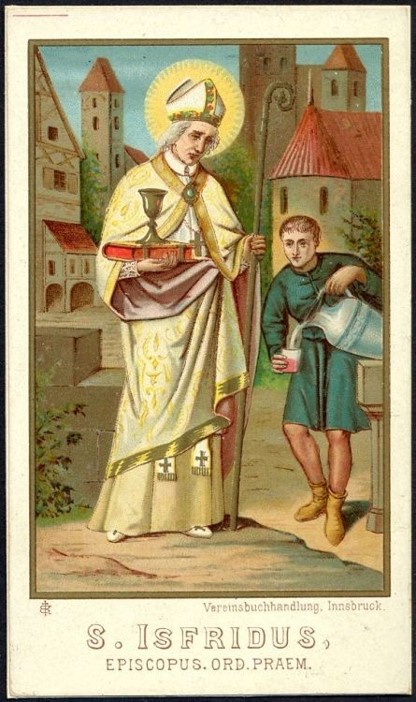 In 1159 Saint Isfrid was elected provost of the abbey of Jerichow in the archdiocese of Magdeburg. In 1180 he succeeded St. Evermode as the bishop of Ratzeburg. He worked tirelessly for the conversion of the pagan Wends. Isfrid was persecuted for his stance against the unjust policies of the emperor and for his defense of the pope. Saint Isfrid fulfilled his vocation to God living out the charism of the Norbertine order.

You are the Creator of light and darkness, O God.
In the fullness of time you sent your Son to dispel every darkness
that clouds our minds and dampens the fire of our hearts.
By our baptism we are called to spread Christ’s Light among the nations.
Your servant Isfrid, following in the missionary steps of Norbert,
both worked to bring reform to the church
and to preach the Good News to those dwelling in the shadows of unbelief.
May his example bring us to a new desire and willingness
to preach the Good News by thinking, speaking, and acting
as true disciples of Jesus who sends us forth today and every day
with healing light and forgiveness for the life of the world. Amen.