The Stations of the Cross, the Way of the Cross, the Way of Sorrows or the Via Crucis, all refer to the journey Jesus Christ traveled from the time he was condemned to death until his body was placed in a burial tomb. Jesus’s followers have told the story of his passion, death, and resurrection. While pilgrims who traveled to Jerusalem visited the sites where it is believed Jesus was tried and executed. Journals have been discovered, dated as early as the fourth century, describing these pilgrims chanting psalms as they processed the Via Dolorosa (the Way of Sorrows) in Jerusalem. Liturgists and scholars view these processions as an embryonic form of the Stations of the Cross.

Today, Christians everywhere follow Jesus’ final journey to unite their suffering with his in the hope of sharing in his Resurrection. In the words of St. Paul: “I wish to know Christ and to be conformed into the pattern of His death, so that somehow I may come to know the power of his Resurrection.” Phil 3:1

Through the generosity of a benevolent donor, outdoor Stations of the Cross have been installed at Daylesford Abbey and were blessed and dedicated in April of 2017. We hope that all who visit this sacred ground will pray these Stations. Too often, the Stations of the Cross are approached as a suitable devotion to be prayed only during Holy Week. Although situated in a historical and theological context, the Stations of the Cross are occasions we encounter in the course of our everyday life. To encourage frequency, we have prepared twelve unique meditations.
Conceived, designed and constructed over an eighteen-month period, these Stations incorporate many symbolic elements which, in their natural setting, could easily be overlooked.

Thresholds are primarily spiritual in nature, not simply physical. Thus, crossing a threshold confirms one’s willingness to move from the natural world to the supernatural. Our gateway entrance marks passage through a holy doorway designed to symbolize one’s decision to enter into the life of Jesus Christ so as to be transformed from sin’s brokenness to wholeness through grace.

Raphael (“God heals”) is the archangel known for facilitating all manners of healing. A key part of the mission at Daylesford Abbey is healing and reconciliation. He is also the patron saint of pilgrims thus making him the appropriate guide for all who travel the Stations. Pilgrimages in early times were a dangerous consideration and pilgrims made wills before their journey for there was no certainty of a safe return.

Most Stations of the Cross are laid out in such a manner that one follows a trail where Station posts are staked where one pauses and prays. The Abbey’s Stations are designed with alcoves where one must physically exit the trail, a place of certainty, to enter the spirituality of each Station’s mystery. Physically, one interrupts their journey to undergo an experience of potentially unitive and transformative change.

THE STATION FRAMES
Wood is a powerful, consistent symbol throughout Scripture: the tree in the Garden of Eden, the wood of Noah’s ark, the altar in Exodus, the kindling Isaac carries. It is not by happenstance that both Jesus and Joseph were carpenters. For Christians, all wood signifies and leads us to the ONE salvific wood of the Cross. Jesus’ sacrifice, which redeemed us on Calvary, is now remembered in the Eucharistic sacrifice that takes place on the altar. All grace flows from the Cross, from our Abbey’s altar, which is why our Stations frames are designed to replicate the Abbey Church. 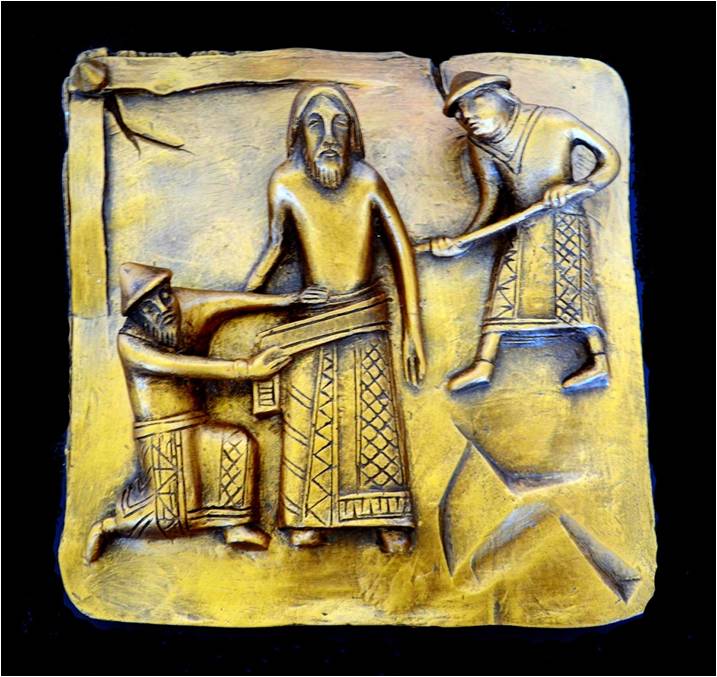 THE STATION IMAGES
The Station scenes are bas-relief replicas from the bronze doors located at the Basilica of San Zeno in Verona, Italy. According to tradition, the crypt inside the Basilica was the marriage site of Shakespeare’s Romeo and Juliet. The church is Romanesque in a design typical of 12th-century architecture. Our holy father, St. Norbert, lived during that time and established the Order of Prémontré in 1120, thus making these Stations age-appropriate.

THE TREE TRUNK BENCHES
Daylesford Abbey took root at our original home – the former Cassatt Estate. As Providence would arrange it, an oak tree was being removed from that property while our Stations were under construction. Our plans called for some seating, carved from large tree trunks, so this coincidence provided the symbolic means to represent our historical roots.

When we pray the Stations, it is not to undertake a historical remembering of what occurred, but to show us what is happening now – what is happening within each of us. The reason for praying the Stations of the Cross is to enter into the mystery of Jesus’ gift of himself for us – to experience his means of transforming suffering through love. We do this “through, with, and in him,” step by step, learning how this plan of love can be carried out by us today. In one form or another, his trials are revealed in ours and our trials in his. In this context, we provide the Stations of the Cross for Various Circumstances. We invite you to pray these Stations as a means of uniting your personal trials with our Lord’s – so you too might share in his Passion for rejoicing in his Resurrection.

PRAYING THE STATIONS OF THE CROSS WITH VARIOUS CIRCUMSTANCES