Despite an overall decline across both the United States and here at home within the Archdiocese of Philadelphia in Catholic Mass attendance, baptisms and Catholic schools and parishes, attendance at St. Charles Seminary in Wynnewood, PA is on the rise. Future priests for the Archdiocese are formed here (as well as many priests for other dioceses).

In 2006, 41 men were enrolled to study at St. Charles for the Philadelphia Archdiocese. This marked the lowest enrollment number in a century.  But the general trend since then has been on the rise. For the 2019-2020 academic year, 81 men were enrolled. 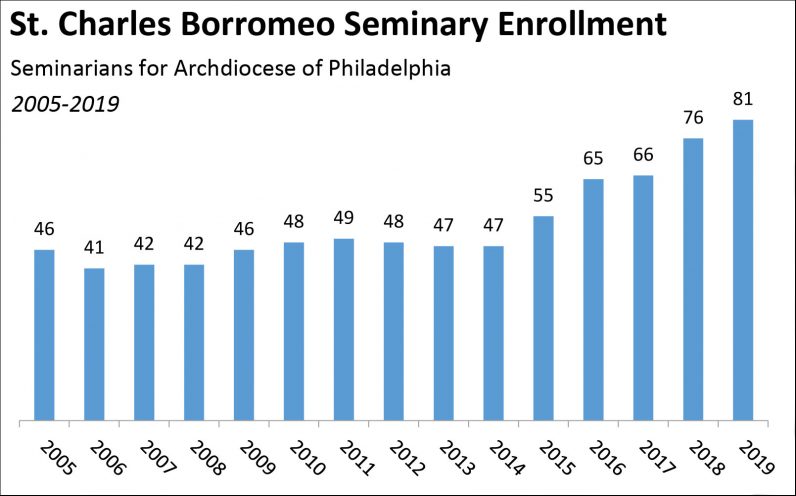 These 81 men have heard a call from God towards religious life. It’s likely that not all of these men will become ordained, but overall, this will continue to lead to higher enrollment and more ordinations in the Archdiocese of Philadelphia.

Bishop Timothy Senior, the rector of St. Charles Seminary stated that the quality of the program for each man is the most important factor. He further said it is a necessity for seminarians to develop in four dimensions of priestly formation: academic, pastoral, human and spiritual. In doing so, this means, as a priest, qualities that allow you to connect to both God and church community are extremely important in addition to doing well in the academic portion.

Bishop Senior commented that St. Charles has been able to adapt with time and allow room for flexibility in the programs individualized for each seminarian.

“I can’t say enough about them; that they want to be part of (the priesthood) in spite of the changes in the culture and everything that has happened in the church,” he said about the men enrolling at St. Charles.

Father Stephen DeLacy, director of the Vocation Office for Diocesan Priesthood, noted that the rise in enrollment began after Pope Francis visited the city of Philadelphia. No longer was the diocese seen as one of scandal, but one  the Pope visits.

If you find God calling you to religious life, contact Abbot Domenic A. Rossi for further information at drossi@daylesford.org or call 610-647-2530 about becoming a Catholic priest in the Norbertine community.