Introducing Father Andrew Ciferni, O.Praem.  Well, not really.  Father has been at Daylesford Abbey for over sixty years!  So he needs no introduction.  But he is the latest member of the Daylesford community we are featuring in our ongoing series about the Norbertines. 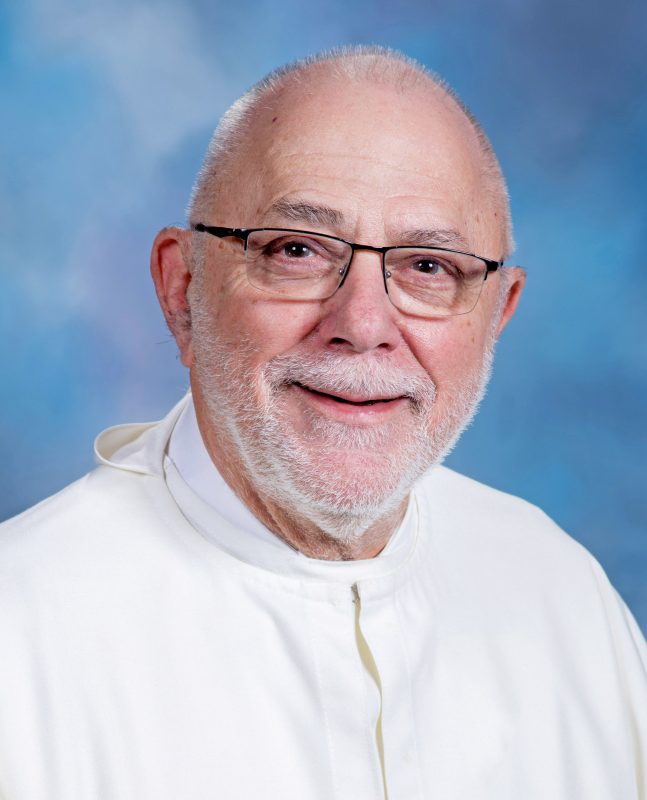 As you read this, Fr. Andrew is on sabbatical at the Abbey Church of Santa Maria de la Vid in Albuquerque, NM. He was kind enough to spend an hour for this interview as he was packing for his trip out west.

Fr. Ciferni, who hails from South Philadelphia, is the grandson of four Italian immigrants who came to the US just before World War I.  Father grew up in a close-knit Italian neighborhood during the 1940s and 1950s. In retrospect, Father’s vocation has taken a number of interesting and unexpected twists.  His path has been directed and redirected by the Spirit.  But his life has always been oriented toward the sense of community, common purpose and a love of the Liturgy that are hallmarks of the Norbertine charism.

Father attended St. Edmund’s Catholic Grade School where he was taught by The Sisters, Servants of the Immaculate Heart of Mary.  He then attended Bishop Neumann High school which was staffed by the Norbertines.  But Father had already come to know the Canons Regular of Premontre in grade school because Norbertine priests served at St. Edmund’s parish where Father was an altar boy.

The process of discerning a vocation is as unique as a fingerprint.  For some, discernment comes late in life. But some of those called to religious life know from an early age.  And so it is the case with Fr. Andrew.  When asked about first discovering his vocation, Father recalled that, “My mother used to say that when I was just three or four years old, I would look up at the altar during Mass and say, ‘I want to be up there some day.’”

Father experienced the Norbertines at Bishop Neumann High School  when they had thirty or fourty young priests teaching in the school.  Even as a high school student, Father felt that the dynamic, student-focused commitment of these men was unique and attractive.  Over the course of his sixty-plus years as a Norbertine, Father has come to understand that this excitement and enthusiasm came from the Norbertines shared life, prayer and communal commitment. And so, Father felt called to the Order and a teaching vocation.

In addition to this, Father recalled how he had a deep attraction to ritual.  As he explored possible vocations, Father Andrew was particularly attracted to the Norbertine commitment to chanting the Divine Office and the centrality of the Eucharist in the life of the Norbertine community.

And so, inspired by his high school teachers, motivated by a desire to teach and an affinity fol and common life and prayer, FatherAndrew joined the Norbertine community in 1959 at the age of 17.

Responding to God’s call will yield a life of unexpected turns.  This axiom is certainly evident in Father Adnrew’s journey.  During his course of study in the mid-1960s, Father was sent to Rome to pursue a License in Theology at the Pontifical Gregorian University. (This is a post baccalaureate  degree between a Master’s Degree and a Doctoral Degree.) The plan initially set out for Father by the superiors of his community was to obtain his Doctoral degree in Liturgy in Europe and then to return to Daylesford to teach in the Theologate.  However, this path never developed.

Father left the United States for Rome in 1965 and didn’t return home for four years.  When he arrived back at Daylesford in 1969, the country was in chaos with civic unrest, protests and the assassinations of three US political leaders.  In addition to the social upheaval, Vatican II ushered in wide and sweeping changes for the Catholic church.  Father’s life was oriented around pre-Vatican II ritual.  He was used to celebrating High Mass each day. And when he returned, the liturgy was almost unrecognizable to the high-church experience that had first attracted Father to the Norbertine order.  It was in the midst of this changing world that Father was ordained to the priesthood in 1968.

Father was preparing to teach at Daylesford Abbey’s Theologate, but in the wake of Vatican II this program was never established.  So, he opted to stay in the United States rather than return to Europe to complete his studies.  Father asked for and was granted permission to conclude his PhD in Liturgy at the University of Notre Dame.  While there, Father’s calling to serve in a pastoral sense, and perhaps his early calling to be a high school teacher, prompted him to secure a position as Rector in one of the men’s dormitories at Notre Dame.

From 1974 to 1987, Father’s main role was the Director of Liturgy at Daylesford Abbey.  During those years, Father Andrew had to shepherd the community as post Vatican II Liturgical changes were adjusted.  Father focused on three pillars:  Hospitality, music and preaching.  These values which were magnified by Vatican II also resonated with the Norbertine charism.  Building an experience of Liturgy and community with these three pillars helped put Daylesford Abbey on the map.

In the early days after Vatican II, Mass at the Abbey was often a mix of styles and experiences.  But excellent music, powerful homilies and warm hospitality attracted hundreds of men and women to the congregation. Father noted that other ministries at Daylesford Abbey grew from the central experience of the Liturgy.  Father’s expertise eventually established him as one of the nation’s foremost LIturgists.   He traveled the country presenting to parishes, dioceses and other Catholic communities here and abroad.. Father’s studies in Europe and here in the USA have also prepared him for international commissions of his Order in the areas of liturgy and spirituality and leadership of Norbertine lay associates.

Father Andrew was eventually sent to Washington DC where he served in several capacities, as professor, Director of Students and later as an Academic Dean.  In this ministry, Father was able to reconnect with his early calling to the Norbertines by working with young people in an academic setting.  Currently, Father is finishing up a temporary post as Chairman of the Board of Trustees at St. Norbert College. Father Andrew served for five years at the college as Director of the Center for Norbertine Studies.  And just two weeks after his tenure in this role concluded, he was invited to join the Board of Trustees.

Beyond his expertise in Liturgy, Father considers himself a “foodie!”  His favorite place to eat is Trattoria San Nicola in Paoli.  Father also enjoys learning about his family history and is working on a Ciferni genealogy.  Finally, Father keeps up with the students he has encountered through his years at Notre Dame, Washington Theological Union, Catholic University and St. Norbert’s College.

Father Andrew knows that the Norbertine charism is as important today as it has ever been. The Norbertines at Daylesford Abbey bring to the Church a shared life and a communal commitment that animates their ministry.  Daylesford Abbey is part of a 900 year tradition that represents a unique combination of contemplative life and active ministry.

Father Andrew stresses that young men considering life as a Norbertine need to feel drawn to a community experience of community life, common prayer prayer and ministry.  Men considering their vocations need to find comfort in committing their lives to Daylesford Abbey, working together in their varied apostolates.