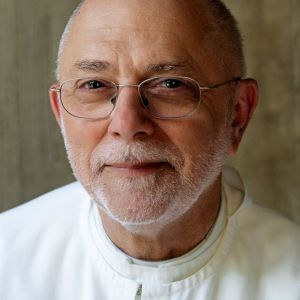 All Good stories are true; some actually happened! Myths are the best stories. They tell us who we are. I was raised hearing at the rituals of festive meals the myth of grandparents who migrated to this land from the Abruzzi region of Italy, that central part of the Italian peninsula held between snowcapped mountains (Easter lamb) and the Adriatic Sea (the seven fishes of Christmas Eve).

I was born on the feast of St. Blase (Feb.3) 1942 — just two months after Pearl Harbor. My baptismal name is Dominic, the name of my father’s father. Three more sons were born to my parents, Bucky and Millie. My life as a child seemed to center on the St. Edmond Parish Church and School where I was taught by the Sisters Servants of the Immaculate Heart of Mary.

From my earliest memories I can identify a fascination with rituals of all kinds: from the five a.m. Sunday Mass that I served as an altar boy to every account I could read of the coronation of Queen Elizabeth. I attended Bishop Neumann High School where I came to know the Norbertines, men who encouraged my intellectual and spiritual development and who impressed me by their common life and prayer.

Immediately after graduation from high school I was vested as a Norbertine novice at Daylesford Priory in Berwyn, PA. It was in the novitiate that I was introduced to the formal study of the liturgy, the Church’s ritual celebration of its central myth, the death and rising of Jesus, and to the history and spirituality of the Canons Regular of Prémontré or Norbertines. The celebration of the paschal mystery and the exploration of the Norbertine myth as an incarnation of the Gospel way have marked my entire adult life.

From 1961 until 1965 I lived and studied at St. Norbert College and St. Norbert Abbey in De Pere, Wisconsin. The college deepened by interest and study of the humanities, especially philosophy, history, literature and the arts. Those were exciting years to be a student as the windows opened by Pope John XXIII and the Second Vatican Council brought a freshness and exhilaration to a large, bright and energetic community of students preparing for priesthood in the Order.

In the Fall of 1965 I was sent to Rome to study at the Gregorian University. My first semester in the Eternal City was the last session of Vatican Council II and a young student like myself felt himself a participant in a major event in history. During the summers I was blessed to visit many of our European abbeys where I first made and deepened friendships that have lasted to this day.

I also acquired some proficiency in the languages that would serve me so well in my studies. In the summer of 1968 I returned to Daylesford for ordination to the priesthood and then turned around and returned to Rome for my last year of studies. I taught theology and liturgy here at Daylesford during the 1970-1971 academic year and then headed off to the University of Notre Dame to begin doctoral studies in liturgy.

Notre Dame provided my first intensive pastoral assignment, three years of campus ministry and the challenging but exciting life as the rector of a dorm of “Holy Cross Hogs.” My teachers and student peers at Notre Dame were and are men and women who have made and continue to make significant contributions to the ongoing liturgical renewal of the Church.

I returned from Notre Dame in the Summer of 1974 and was appointed liturgy director here at Daylesford. For four years I served for and with the abbey-based Body of Christ Prayer Community. These were years when I did a fair amount of speaking and writing in the areas of pastoral liturgy and art and architecture for Catholic worship.

In 1987 I moved to Washington, D.C. as formation director for our students. From 1987 until 1991 I taught homiletics and liturgy at the Catholic University of America and from 1991 until 1997 I was professor of liturgy at the Washington Theological Union where I was also the academic dean for two years. My association with the religious communities whose students I taught during these years gave me a keener sense of my own Norbertine vocation.

The reorganization of our community brought me here in August 1997. Once again I’ve been serving as the abbey as liturgy director and rector of the abbey church. The latter position has involved me in our family-centered religious education program that has been a particularly engaging and enjoyable area of pastoral ministry for me. After being on the international liturgical commission of our Order for many years, I’ve switched hats and now chair our international commission on Order spirituality. This usually means that I get to Europe about once or twice a year. I’ve also had the opportunity to teach at our priory in South Africa and to work with one of our communities in India.

Day to day I continue to be inspired and nourished by the myths and rituals that sustain our Norbertine vocation: the stories of our God who is a communio of Father, Son and Spirit; the Jerusalem community born from the side of Christ; Augustine’s embodiment of the Jerusalem dream at Hippo; Norbert’s revival of that dream at Premontre; and the ongoing work of implanting the Norbertine myth in these United States of America.