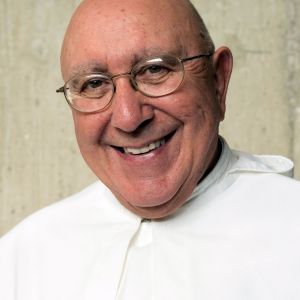 There is a saying: God writes straight with crooked lines. I suppose that saying applies to me as I look back on my fifty years as a Norbertine.

I was brought up by immigrant Italian parents. While they were very God-centered, I would say that it was not a priority that one of their four sons would become a priest or religious. However, going to a Catholic school did reinforce the strange calling that I felt even as young as second grade. Being an altar boy strengthened this feeling in being around priests and serving at the Lord’s altar.

In high school this feeling would take root in going to a Norbertine school and watching the community members interact with one another. It was much different than the diocesan priests in the parish. Along with several other classmates in high school, I became a Third Order Member. It was my intention to join the Order after high school, but that is when the crooked lines started to appear in my future.

At the same time as I graduated from high school in 1957, my father became very ill, and my mother asked me to stay home for moral support. I was one of the oldest so I thought it was my obligation to help out at home with my younger brothers.

However, I still pursued my vocation while working. I thought I should look into some other Orders beside the Norbertines. My investigation led me to the Trappist monks in Berryville, Va. It was there that I found much peace and an appealing way of life. When I told my mother I was thinking about being a Trappist, she replied: “You will never make it. You cannot keep your mouth closed that long.” In those days the Trappists took a vow of perpetual silence. I guess my mother knew me better than I knew myself.

In 1960 my oldest brother Vincent returned from the Service, and that was my opportunity to pursue my vocation. Because my grades in school were never that great, I thought I had a better chance of being a brother than a priest.

I applied to the Norbertine Order in the summer of 1960 and was accepted within a few weeks. The novitiate was in Paoli, PA, which was only about 25 miles from Philadelphia where I was raised, but the change from inner city to suburban country might as well have been a million miles away.

There I found God in a special way and was joined by other young men who would also follow their dream in becoming a Norbertine. I donned the white habit of Saint Norbert and was given the name of Brother John Joseph. The novitiate was filled with wonderful days of prayer, learning and growing in friendship with the men in white and becoming one with them.

On March 7, 1963 I professed Simple Vows and continued my formation. Shortly after my first vows, the major superior, Prior John E. Neitzel, asked me to become his secretary. Thus, I was introduced to administration in the Order. This work would continue as my ministry for most of my religious life.

While working in the apostolate of serving our community, I became involved in pastoral work at the Abbey. I was quite happy being a brother and on March 2, 1969 professed my Solemn Vows.

Shortly after Solemn Vows, I would hear God’s calling once again to the priesthood – a calling within a calling. God was writing again with crooked lines in my life. For a while I resisted the call to be ordained, but it is hard to wrestle with God. It meant going back to school while continuing to help the community in administration. I discovered that when you say “yes” to God, things work out in spite of circumstances.

On May 25, 1974 I was ordained a Norbertine priest. It was a great day of joy for me, my family and friends, and the community. In my 35 years of ministry as a Norbertine priest, God has enriched my life in so many ways, giving me friends and opportunities of service that I never dreamed of as a youth.

Yes, God does write straight with crooked lines. As I enter the last quarter of my life, it is with a humble heart that I thank God for the calling that he has given to me. It was the “Road Less Traveled” as the poet Robert Frost wrote, but it has made all the difference in the world to me.